VNRs, National “Spotlight” Reports and the Future of the HLPF

Every year since the adoption of the 2030 Agenda in 2015, governments are invited to present Voluntary National Reviews (VNRs) on their progress in achieving the Sustainable Development Goals (SDGs) at the High Level Political Forum (HLPF) of the UN. This process is heralded by some as a great opportunity to hold governments accountable to their actions and by others as a beauty contest riddled with misrepresentation and power imbalances. Civil society organizations in many countries produce their own alternative “spotlight reports,” playing with the name of “shadow reports” traditionally given to such independent voices in the Human Rights context.

An event titled “National Reports on 2030 Agenda: What do They (Not) Tell Us?,” jointly hosted by the United Nations Development Program (UNDP), the Committee for Development Policy (CDP), Global Policy Forum (GPF) and Social Watch, explored these tensions and sought to identify opportunities to improve reporting, monitoring, follow-up and accountability in these national review processes. 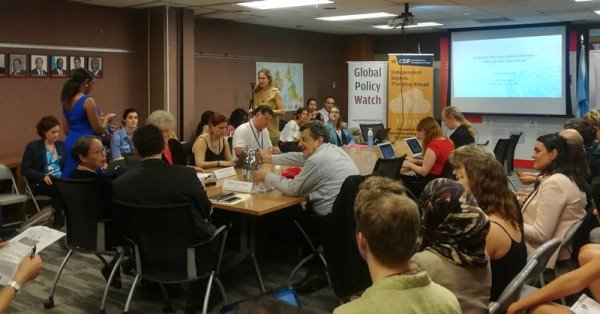 Pedro Conceição, Director of the Human Development Report Office at UNDP served as moderator, framing the discussion—highlighting both the importance of national reporting (both by governments and civil society via spotlight or shadow reports) and voiced the challenges of a voluntary follow-up and review mechanism that some countries do not use, while others have reported more than once.. Putting aside quality of governmental presentations on the VNRs, how is it possible to ensure the VNRs are a productive process if no international mechanism exists to hold Member States accountable to what’s presented?

Sakiko Fukuda-Parr, Professor for International Affairs at the New School and Vice-Chair of the CDP presented findings of the CDP’s Analysis on the VNRs presented in 2018. CDP is a subsidiary body of ECOSOC that provides independent advice on issues critical to the international development agenda. Fukuda-Parr’s analysis unveils areas, themes and concepts not adequately addressed in VNRs. These “orphan targets” as she calls them, juxtaposed against the greater rhetoric of the 2030 Agenda, present contradictions. With this in mind, she says, it is “Incumbent on those of us not writing the reports to put pressure on governments…to send meaningful reports.” When it comes to “leaving no one behind,” Fukuda-Parr notes that 41 of the 47 VNRs make reference to the idea, yet less than half address any commitment to giving priority to help those furthest behind first. Without clearer strategies, plans and analysis, VNRs don’t serve their follow-up and review purpose, and do little to encourage Member States who are “off-track” to switch trains and head in the right direction.

Roberto Bissio of Social Watch discussed findings from national and regional “spotlight reports” from civil society, quoting examples from Finland, Guatemala, the Philippines, Jordan, France and the regional report on the EU and its “externalities” among others. Highlighting the importance of independent reports in holding governments accountable to areas often omitted in VNRs (like inequalities, extra-territorial impacts and spillovers, tax havens, arms flows etc.), Bissio presented clear tensions in achieving the SDGs at a national level. These tensions are not receiving the level of discussion needed in the VNRs, but countries cannot meet the 2030 deadline without addressing them. He discussed the trade-off between economic growth and long-term sustainability, as well as the need for policy coherence and funding that reflects and respects such coherence. Bissio’s remarks reflect many frustrations that CSOs have with the VNR process, but also highlighted how ever-important it is to be involved in the national report process and to consider ways in which the HLPF Review process can be leveraged to reform the way in which the VNRs are structured at present.

Barbara Adams of Global Policy Forum highlighted findings from the 2019 Civil Society Reflection Group’s Spotlight Report with a focus on governance challenges for the 2030 Agenda and the HLPF. Commenting that although the HLPF aspires to be a mechanism for review and follow up, “it has become a marketplace for a lot of ideas and priorities.” This competition for space and attention proves challenging, particularly when the HLPF itself lacks the rules and framework for what is meant to be reviewed and followed-up on each year. This is particularly alarming, Adams argues, as the SDGs themselves seem to be on just about every agenda within the United Nations and beyond—and the mandatory HLPF review to take place in 2019/2020 needs to seriously reconsider changing the direction and configuration of the HLPF itself. An aspect needing review is the VNRs. For example, national reports could include an obligatory chapter that discusses extraterritorial influence of countries and iterates what an enabling global environment might look like to help governments achieve their national obligations. While governments are ultimately accountable to their citizens, a reformed HLPF might create a better space for countries to hold each other accountable for their global and extraterritorial impacts.

Pedro Conceição of UNDP synthesized the panelists remarks and opened discussion with questions to provoke participation and fuel fruitful dialogue. Conceição weighed in on the fragmentation of civil society and a need to unify action to affect change to the HLPF as well as the fact that “implementing 2030 doesn’t depend alone on what the countries do in their borders” and called for VNRs to include a section on cross-border issues.

A lively discussion in the room unveiled some interesting analysis and opportunities ranging from every day people’s data needs, the regional SDG fora as a potential space for shaping VNRs, the functional role of VNRs in building capacity at a national level to then translate into policymaking, and the role of civil society in holding governments accountable post-VNR process. Replies from the panelists addressed the areas with much enthusiasm. Sakiko Fukuda-Parr outlined the intent of CDP’s reporting to be provocative, recognizing that “what is important is that the process facilitates real debate within countries about what they are doing” and that policy work needs to take place outside of the VNR setting.

Roberto Bissio discussed the anti-development actions being undertaken by corporations and the fact that “countries that rank higher in the UNDP’s human development index also rank higher in damage by spillovers. We need to change the paradigm to do no harm.” Bissio suggests substantive engagement by civil society in the VNR process and on these issues is critical. Barbara Adams discussed the value of the VNRs as a process, rather than as an outcome and highlighted, “we need to be honest about the power asymmetries, some countries have more policy and fiscal space. Also we need to be honest about the UN’s policy space.” Also with the concerns about inadequate or badly used funding for the SDGs, the VNRs at the HLPF run the risk of looking more like a fundraising pitch than an earnest dialogue about progress and challenges. The panelists also discussed the importance of the HLPF Review—Adams warned against “the HLPF review being an exercise on working methods and tinkering and nothing more. As currently set up, the HLPF cannot measure up to the ambition of the 2030 Agenda.”

The presence of many cabinet ministers and other high level authorities and the attendance of hundreds of civil society participants express interest in and value from the VNR process. The 2030 Agenda organized the HLPF on a four-year cycle that ends with a summit-level session in September. The ensuing review should affect substantial changes to the HLPF, rather than allowing it to be solely about modalities.

Without substantial changes to the HLPF, the United Nations runs the risk of losing widespread faith in itself as an institution and multilateralism as a means to promote accountability and affect change, further engendering dangerous trends.

On the HLPF and VNRs

“Democratic global governance: if it doesn’t challenge power it isn’t democratic” By Barbara Adams. Chapter from the 2019 Spotlight Report

On the SDG Indicators and Data

“Who influences whom in the policy arena? Statisticians seek greater voice” By Barbara Adams and Karen Judd, Global Policy Watch

“Measuring the SDGs: Who controls the process, who owns the results?” By Barbara Adams and Karen Judd

“’You say you want a [data] Revolution’: A proposal to use unofficial statistics for the SDG Global Indicator Framework” Guest working paper by authors Steve MacFeely and Bojan Nastav